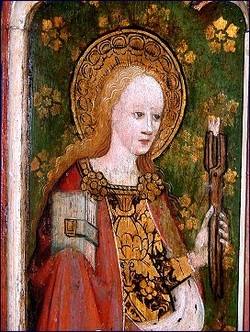 Saint Apollonia is the patron saint of dentistry.  She was one of a group of virgin martyrs who suffered in Alexandria  during a local uprising against the Christians prior to the persecutions of Emperor Decius.  According to legend, she was tortured by having all of her teeth violently pulled out or shattered (this is why she is considered the patron of those suffering from toothache or other dental problems).

The Eastern Orthodox and Roman Catholic Churches celebrate the feast day of St. Apollonia on Februsry 9, and she is popularly invoked against toothaches because of the torments she had to endure. She is represented in art with forceps in which a tooth is held.

The painting shown is an ancient depiction of the saint from a church in England.